Skip to content
On September 15, 2018 Major League Liberty (MLL), an alt-right lunatic fringe propaganda outlet operating on the agenda of spreading conspiracy theories while attempting to normalize racism and ultra-nationalism, held a permitted event  “Rally to Protest Internet Censorship of Conservatives” at the Colorado State Capitol in Denver.
The event was organized by local fascist shithead “Louie Huey”, we don’t know his real name yet, but he’s down with the rest of the MLL clowns, and up until August 29th, was a member of the Colorado Proud Boys.
These grown men, who seem rather fond of referring to themselves and each other as “Boys”, have engaged nationally in acts of violence against minority communities, are vocal Islamophobes, rabidly anti-immigration, support austerity economics, transphobia, pro-imperialism, and pro-colonialism, which led to being classified as a hate group by SPLC.
Part of the PB “rebranding” is to deny that they are white supremacist fascists; instead, they are claim to be “Western Chauvinists”.
Colorado members of the Proud Boys frequently align themselves with other white nationalist groups in Colorado, including the Three Percenters, TPUSA and the now disbanded Traditionalist Workers Party. It should also be noted that Proud Boys and affiliates fought side-by-side with fascists at the August 2017 “Unite The Right” rally in Charlottesville,which resulted in 35 people being injured and the murder of Heather Heyer.

https://www.unicornriot.ninja/2017/violent-white-supremacist-rally-charlottesville-ends-murder/
Locals Louie Huey, Zach Lightner, and Shane Reeves also traveled to Patriot Prayer in Portland earlier this summer, participating in Joey Gibson’s neo-fascist street gathering that resulted in the ever loving fascist pigs to attack the crowd that gathered to protest the Nazis.
https://cospringsantifa.wordpress.com/2018/08/11/proud-boy-zach-lightner/
On the morning on September 15 in Denver, a small group met at the clocktower on 16th and Arapahoe in downtown Denver to do outreach and gain public support for “Good Night Alt Right: Mobile Resistance Dance Party.” Before the anti-racist party-goers could even get started on outreach, six or more pigs in their “unmarked” SUVs were seen parked across the mall, while a handful of Proud Boys wearing their Fred Perry polo uniforms were sitting in nearby restaurant patios, in what appeared to be a set up for an ambush. One Proud Boy acted as bait and repeatedly antagonized and physically harassed the dance party, refusing to leave. Once the party moved from the clock tower, no cops were in sight.
Knowing Denver Police Department’s history of violent crack down on dissent and radical protest movements, it seemed rather suspicious that there was no visible police presence following the dance party as they were being antagonized and followed by Proud Boys.
The Proud Boy who had been previously harassing the antifascist dance party earlier followed and assaulted one of the party participants at the end of the mall near Court Street, in full view of the public.  The dance party continued to move and made its way to the capitol, where State Police denied the party entry to the Capitol stairs through use of police bikes as a barricade. Citing the need for a permit, one cop reached over and unplugged the  party’s sound system and continued to protect MLL three hours before their permit officially began.  After fixing the sound system and a lot of shit talk, the mobile dance party made its way back toward the general public gathered at the amphitheater and Civic Center Park, across from the capitol.
Soon after, the party was confronted by a group of Proud Boys wielding sticks, melee weapons, and LARP gear in Veteran’s Park. Law enforcement eventually made the Proud Boys leave and the antifascist dance party decided to move once again into Civic Center Park.
Meanwhile, as white supremacists gathered at the state capitol under the protection of law enforcement, a state trooper decided to increase the level of toxic masculinity and collaboration between police and fascists organizing for street violence.  A state trooper asked the neo-fascists to turn off their cameras and then the state trooper made a message of blatant solidarity with the fascists, which was then livestreamed to the internet by pro-NRA and citizen journalist page “The Frosty Report”. Frosty Report has been disrupting and heavily surveilling youth Never Again events this spring and it was of no surprise to see Frosty Report collaborating with neo-fascist groups on the capitol stairs.  This foolish recording by Frosty Report allowed a leftist Twitter account to alert the general public and local media of blatant collaboration between law enforcement and neo-fascist groups.
9 News reports:
“In a video, the trooper then appears to speak to the men in red hats displaying, ‘Make America Great Again,’ saying: ‘I know some of you came here to fight. I can tell by what you’re wearing. That’s not happening today. If you want to fight, stick around, I’ve got a couple guys, they also want to fight.’
The group of men cheered. One man can be heard on a Facebook live stream saying ‘Let’s stay tight Proud Boys!'”
https://www.9news.com/article/news/csp-puts-trooper-on-paid-leave-after-interaction-with-far-right-protesters/73-595285527
The officer was placed on paid leave within 24 hours.  We would like to take a moment to thank the “Frosty Report” for not listening to that cop’s request and for filming his statement, like the total dumbasses you truly are; we thank you for inadvertently snitching on yourselves.  Keep up the great work fellas; maybe you can get all the cops suspended next time!  You were the best media antifascists could have asked for that day.  Don’t let all the other racists who are mad at you for livestreaming that cop get you down.  We will always have a special place for you in our cold, black & frosty hearts.
The “Frosty Report” later requested their incriminating video to be removed from the leftist Twitter account, citing “copyright infringement.” This is ironic, considering the whole rally was supposedly organized to protest the internet censorship of conservatives and the removal of neo-fascist content from the web.
After the dance party regrouped in Civic Center Park, about 14 people began walking  to meet up with the other group of anti-racist protestors gathered in Veteran’s Park as the party crossed Lincoln, about 10 Proud Boys chose to come down from the capitol without a police escort to antagonize the dance party and start some shit.
After 4-6 minutes of confrontation, two Proud Boys required further medical attention in the back of an ambulance; police arrested seven anti racist protestors, detained one anti racist protestor and zero neo-fascists were arrested. The Proud Boys failed to physically censor people’s rights to denounce white supremacy and the dance party was successful at defending itself.

Here is a screen cap of Martin Meyers issuing threats back in August. 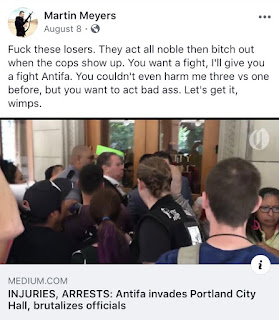 By the way, our comrades down South wrote about the lil’ raging racist hipster man-baby Martin Meyers awhile back, if you want to check out his bio, CoSpringsAntifa did some great write ups;

https://cospringsantifa.wordpress.com/2017/07/17/report-back-co-springs-justice-4-jesse-rally/
https://cospringsantifa.wordpress.com/2017/06/20/the-ancaps-of-colorado-mike-morris/
https://cospringsantifa.wordpress.com/2017/12/08/report-back-denver-march-against-white-supremacy-12-4-2017/
A fews day later an article began to publically circulate, exposing GOP candidate Walker Stapleton’s Super PAC at the white supremacist rally for the intent purpose of recruiting new staff for his campaign.
The report also said what many people noticed – two of the featured speakers at this lunatic fringe Rally of Racists were State Rep. Alexander “Skinny” Winkler (Northglenn) and the GOP Republican candidate for Colorado’s 7th Congressional district, Mark Barrington.
https://www.coloradopols.com/diary/112647/hate-group-rally-at-capitol-features-colorado-republican-speakers-and-stapleton-super-pac
While antifascists usually abstain from partisan party politics, and will continue to do so, this glaring and disturbing revelation cannot go unmentioned.
Walker Stapleton’s great grandfather was Benjamin Franklin Stapleton, the Mayor of Denver for two periods, comprising five terms. He also served as a high-ranking member of the Ku Klux Klan while the Colorado State Auditor from 1933 to 1935.  Benjamin Stapleton’s reign as mayor is considered to be one of the darkest times in Colorado history.  It seems that in the case of the Stapleton Legacy, the apple does not fall far from the tree.
Walker Stapleton, the great grandson of the Klansmen Mayor of Denver, and the current Colorado State Treasurer, used a white supremacist rally to recruit staff and volunteers for a gubernatorial election run for 2018.
Walker Stapetlon was also a key speaker at the Western Conservative Summit, the event of the year for these parasites, where old and young racists alike gather to court and recruit, adding to their racist ranks.
Of course being held at the Co Convention center, it was crawling with neo-fascist locals Louie Huey, Ty Freedom, Zack G.(Don’t these guys have jobs? They sure have a lot of free time to be galavanting around everywhere like the Divas they want to be)!
Meanwhile, Walker Stapleton tries to deny his family’s obvious deep ties to white supremacy and the Klan. He claims that the Stapleton family’s racist ideology is a thing of the past; yet Stapleton has repeatedly aligned himself with white nationalist platforms, both locally and nationally.
It is clear: “free speech” events such as the one on September 15th in Denver are an attempt to normalize white supremacy and racism in public discourse.
Share this...