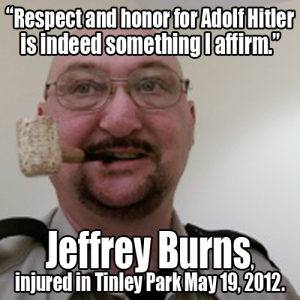 Jeffrey Stuart Burns (aka Thomas Stuart) from Wood River, IL would have you believe he’s a stand-up guy. He’s a devout Roman Catholic with nearly 2000 posts on forums.Catholic.com. He loves dogs, especially pits and shepherds. He works in private security. He listens to Christian music. He loves the outdoors. His favorite books are Sherlock Holmes, The Seven Habits of Highly Successful People, and just near anything Ayn Rand ever wrote. He even smokes a pipe.

But there’s another side of Jeff. He’s the type of guy that dresses up like a Muslim for Halloween. He also is a forum moderator for world’s largest white supremacist website, Stormfront. He specializes in moderating conversations about white supremacy and religion. When it comes to keeping conversations about whether or not Jesus was Jewish civil and respectful, Jeff is your man. When you combine Jeff’s religious devotion with his perverse views about race you come up with an intense ideology:

“I personally blend my traditionalist Catholicism with some affinities for NS [national socialist] esotericism and, increasingly, some elements of Heathenry and Aryan Vedism. Hardly the first to do that: many before me of a mystical/philosophical bent have explored similarly. The thing is: if mystical [white nationalism] is part of the path one is drawn to–it should be a DISCIPLINED walk, and not just a verbal or mental assent. I’m probably no model of that: the first rule of discipline is to establish a stable routine. Mine gets tossed every which way by nature of my work. Anyhow: respect and honor for Adolf Hitler is indeed something I affirm. [emphasis added]”

Besides being a Hitler loving national socialist, Jeff is also a member of Council of Conservative Citizens and American Third Position (screenshot). Jeff’s true unfulfilled ambition within the white supremacist community was to join Volksfront, a violent skinhead crew (screenshot) but failed to meet their physical requirrements.

Here’s Jeff’s version of national socialism in his own words:

The incompetant [sic] steel-magnate, the inept butcher, the shop-keeper who simply could not keep shop–these would lose the business concerns which they could not operate properly anyhow. But they would yet have social safety-nets cushioning them from their fall and enabling them to return to productive economic activity in some other way. This is anathema to the underlying preconceptions of true socialisms, Marxian or otherwise, because all true socialisms start with the classical liberal idea that all humans are fundamentally equal, separated and differentiated only by unnatural class differences which can with time be eliminated. Start with the recognition that NS [national socialist] ideology does NOT believe in the fundamental eqality [sic] of humankind but rather that people are naturally different and will have organically-differentiated functions in an economy and you begin to grasp what separates NS [national socialism] from pure socialism.

The underlying vision of socialism is the abolition of government, the “whithering-away of the State”, the establishment of anarcho-syndicalist democratic systems where everything is held in common, everyone has an equal vote, and “government” is wholly synonymous with the People. A vision which Marxist-Leninism could never attain to despite systematic efforts to ‘scientifically’ attain such. SOCIALISM IS THE ATTEMPT TO ACHIEVE ABSOLUTE DEMOCRACY IN EVERY RESPECT. Fron [sic] that perspective a market-economy is loathsome and undesirable as the ultimate goal is economic cooperation and not competition. National Socialism is the opposite: it is a repudiation of equalitarianism and the self-conscious effort to attain to a society and an economy governed by elites, specifically by elites born and systematically proven to their role. From that perspective, a free competitve marketplace is desirable as the proving-ground of the economic elites.

This is central to a proper understanding of modern political philosophy: THE EXISTENCE OF A BUREACRACY IN A SOCIALIST STATE–indeed the existence of any sort of “exoskeleton” of government apart from the “people”–REPRESENTS A FAILURE OF SOCIALIST THEORY. On the other hand–THE PRESENCE OF A STRONG STATE CENTERED ON A LEADER AND GOVERNED BY ELITES WHO ARE THE CREAM OF AN ETHNICALLY-PURE ARYAN PEOPLE IS A NATIONAL SOCIALIST IDEAL. From this perspective a “democracy” is an inherent evil and democratic “ideals” are an evil to be purged from the Body Politic. A National Socialist state does not want democracy: it wants a nation of Overmen, a Master Race of people rendered hardened against the weaknesses of equalitarianism and democracy which Jewish ideology have insinuated into our minds to weaken and destroy us. The vision of National Socialism is in many ways the vision of the Dune trilogy [all emphasis added].

To give him credit, he’s one of the few nazis I’ve encountered that has a strong enough grasp on political theory that he is capable of discerning the difference between Marxist-Leninism and anarcho-syndacalism. It’s also somehow refreshing to hear a fascist admit openly that they have no sentimental attachments to notions of equality or democracy.

Truly the “Overman” of the master race he’s considered to be within the white supremacist community, Jeff has been attending leadership retreats sponsored by Stormfront. Though you might not have heard of Bob Whitaker, if you’ve followed news coverage of the Tinley Park Five you’ve probably heard parroting of what white supremacists are now referring to as the “Bob Whitaker Mantra”:

Again referencing Stornfront’s [sic] recent Leadership Seminar: those who coin or appropriate a term first own it. It is very difficult to successfully re-capture or redefine a word the Enemy camp siezed [sic] first. “National Socialism” was an attempt to recapture the word ‘socialist’ for the Right, and it has only succeeded in the minds of most ordinary Americans in confounding Nazis with Communists. By the same token, we cannot re-define ‘racist’ as a badge of honor nor successfully abridge it into ‘racialist’. Commies coined the word and they own it. What we can do is throw the epithet back on them: “racism is code word for anti-White; anti-racism is code for White genocide. Our people are the ones who truly believe in diversity: our enemies want to destroy diversity through racial integration”. THAT is the Bob Whitaker “mantra”, and how we use it.

Jeffrey Burns and his cohorts are fascists in a very real and classical sense of the word. They are obviously racist and they know it. They know that YOU don’t like racism so they figure they’ll just change the terminology. The tactic is neither new nor shocking. The only real surprise is just how willing the corporate media has been to perpetuate their blatant lies in print without the slightest bit of investigation or burden of proof. (///)

If you have any information about Jeffrey Burns, especially regarding his work in private security, please contact us.