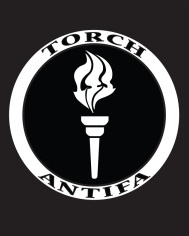 It is with both great excitement and some sadness that we introduce TORCH, an anti-fa network. Out of the old Anti-Racist Action Network rises a new, militant anti-fascist network. This isn’t a fracture or schism coming from internal strife but the result of the realization that the blueprint laid out in a time before the internet no longer serves as a sufficient model for combating fascism. We acknowledge that many of our comrades have lost much, some their lives, under the banner of ARA. Their sacrifices will not be forgotten and their fight is still our fight. Because of changes in the current political climate as well as our own political development, our understanding of what fascism is and how it relates to other political entities such as the working class, capital, and the state has evolved. We wanted to build a new network that fit our needs and politics. One that is more relevant and appealing to a new generation of anti-fascists.
We are still on the prowl. We will still continue to expose, confront, and act. Fascist beware… we are TORCH.

1. We disrupt fascist and far right organizing and activity.

2. We don’t rely on the cops or courts to do our work for us. This
doesn’t mean we never go to court, but the cops uphold white supremacy
and the status quo. They attack us and everyone who resists oppression.
We must rely on ourselves to protect ourselves and stop the fascists.

3. We oppose all forms of oppression and exploitation. We intend to do
the hard work necessary to build a broad, strong movement of oppressed
people centered on the working class against racism, sexism, nativism,
anti-Semitism, Islamophobia, homophobia, transphobia, and discrimination
against the disabled, the oldest, the youngest, and the most oppressed
people. We support abortion rights and reproductive freedom. We want a
classless, free society. We intend to win!

4. We hold ourselves accountable personally and collectively to live up to our ideals and values.

We're fundraising by selling these shirts in colloboration with @antifaintl!

Never forget August 12th.
6yrs ago today political prisoner,Hugo Pinell was killed by white supremacists at Folsom prison.
4yrs ago today Heather Heyer,of the anti-racist resistance opposing the white nationalists in Cville,VA was murdered by one of the Nazis present that day.

We Are Now: The Story of an Armed No-Cop Zone in Atlanta

Ahead of the anniversary of the George Floyd uprising, we present a film centering the voices of participants in the occupation of the Wendy’s in response to the police murder of Rayshard Brooks.